Italian Beef? Sweet, Hot, or Both? Jay’s has you covered any way you like them. 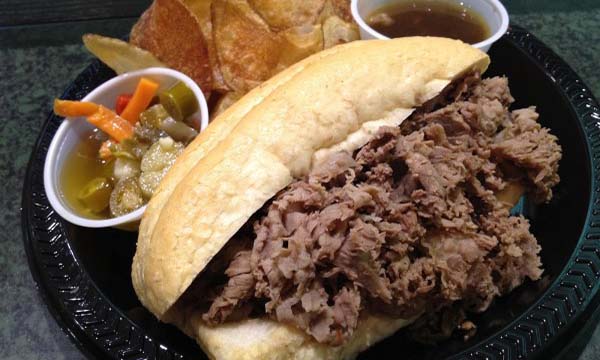 An Italian beef is a sandwich of thin slices of seasoned roast beef, dripping with meat juices, on a dense, long Italian-style roll, which originated in Chicago where its history dates back at least to the 1930s.[1] The bread itself is often dipped (or double-dipped) into the juices the meat is cooked in, and the sandwich is typically topped off with Chicago-style giardiniera (called “hot”) or sauteed, green Italian sweet peppers (called “sweet”).

Italian beef sandwiches can be found at most hot dog stands and small Italian-American restaurants throughout the city of Chicago and its suburbs. They are difficult to find outside of Illinois. However, Chicago expatriates have opened restaurants across the country serving Italian beef, Chicago-style hot dogs, and other foods original to the Chicago area.

Italian beef is made using cuts of beef from the sirloin rear or the top/bottom round wet-roasted in broth with garlic, oregano and spices until medium rare or medium. The roast is then cooled, shaved using a deli slicer,[2] and then reintroduced to its reheated beef broth. The beef then sits in the broth, typically for hours. Once a sandwich is ordered, the beef is then drawn from the broth and placed directly on the bread. Because the meat is served dripping wet it is necessary to use a chewy bread, as a softer bread would disintegrate. The typical bread used is long, Italian style loaves without seeds sliced from six to eight inches in length. Italian beef can also be shredded instead of sliced.

Many retailers purchase pre-seasoned, pre-cooked, and pre-sliced Italian beef with separate cooking broth (“au jus”), and then heat and serve, while the most acclaimed Chicago beef places typically prepare the beef on their own premises according to their own recipes. Some produce their own homemade giardiniera as well